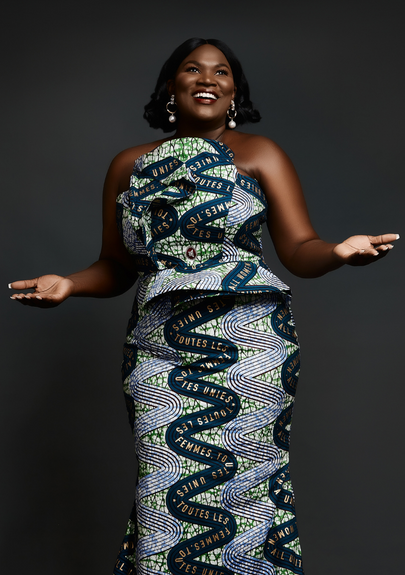 Anita Erskine is a multi-hyphenate – a TV Host and Producer, Professional Compere and Moderator, Actress and Keynote Speaker. Her professional experience spans more than 20 years in Media in Canada, parts of Europe and West, Central and Southern Africa. She is an Entrepreneur, the Chief Executive Officer and Principal Creative at Anita Erskine Media, a boutique content production and distribution venture she began in 2016.

2014 marked a major renaissance in her life.

A series of personal challenges fuelled Anita’s resolve to rethink and reshape her career to meet her growing desire to tell stories that drive social change. Anita Erskine’s Sheroes – a syndicated Television Talk Show, was created for three categories of Women – African Women, Women of African Descent and Non – African Women who have a special relationship with Africa. Each episode is designed to underline a major life lesson that highlights the unique experience of Anita’s guest, while serving as an urgent call to action for the elevation of Women. Today, SHEROES is enjoyed by over 15 million viewers across all 54 African countries and in North America and across Europe.

In 2020, her appreciation for Entrepreneurship as the key driver of Africa’s socio – economic emergence, brought her into the coveted role of Official Host of the Africa’s Business Heroes – The Jack Ma Foundation’s flagship philanthropic entrepreneur program in Africa. Through this affiliation, Erskine has had the unique opportunity of interacting with hundreds of African entrepreneurs every year.

Today, Anita’s career is driven by her belief in Women and Girls and the essence of Equality, Diversity and Inclusion, should take center stage in conversations around the world, in order to provide an equal playing field for all.

Session: Live With Intention – Because Good Enough is no longer good enough

A three- part interactive session.
Part 1: The Story – What I wish I know…journey to becoming intentional.
Part 2: The Workshop – Strategy Is Knowing Yourself.
Part 3: Ask me anything – Q & A

My advice for Summit attendees

As I navigate the corridors my life’s journey is taking me into, I realize that merely waiting for things to happen is not sufficient. My vision and mission require the kind of precision that match my raw ambition and passion. I can choose to be just “ok”….or I can choose to be extraordinary…can we reimagine our future in which we are more intentional about the things we want?